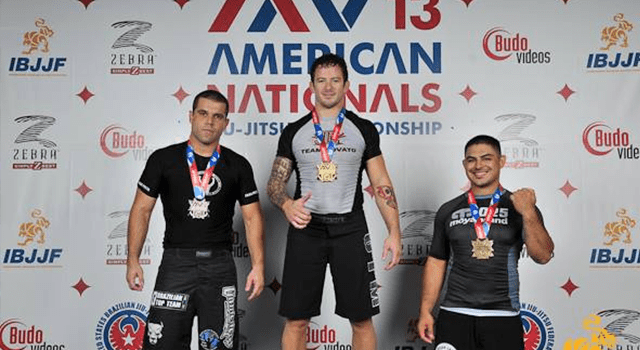 Last weekend Professor Ben Baxter flew down to LA to compete in the 2013 American National Tournament. Ben has been working tirelessly for many months finishing the new academy, preparing the team for the Oregon open and fitting in training when he could. Well last week all of his hard work and sacrificed paid off!

In his first match in the gi division he put on an absolute Jiu Jitsu clinic. After out scoring his opponent 45-0 he went on to submit him via arm bar! At the end of the day and after some very tough matches he made it to the podium to take home 3rd place!

In the no-gi division, he had very tough opponents! His first match he was able to implement his game plan and come out on top. In the final he went against the 2012 Pan American No Gi champion, Diego Gamonal Nogueira and after a hard match was crowned the 2013 American National No-Gi Champion.

Congrats to Professor Ben, our American National Champion for 2013!!